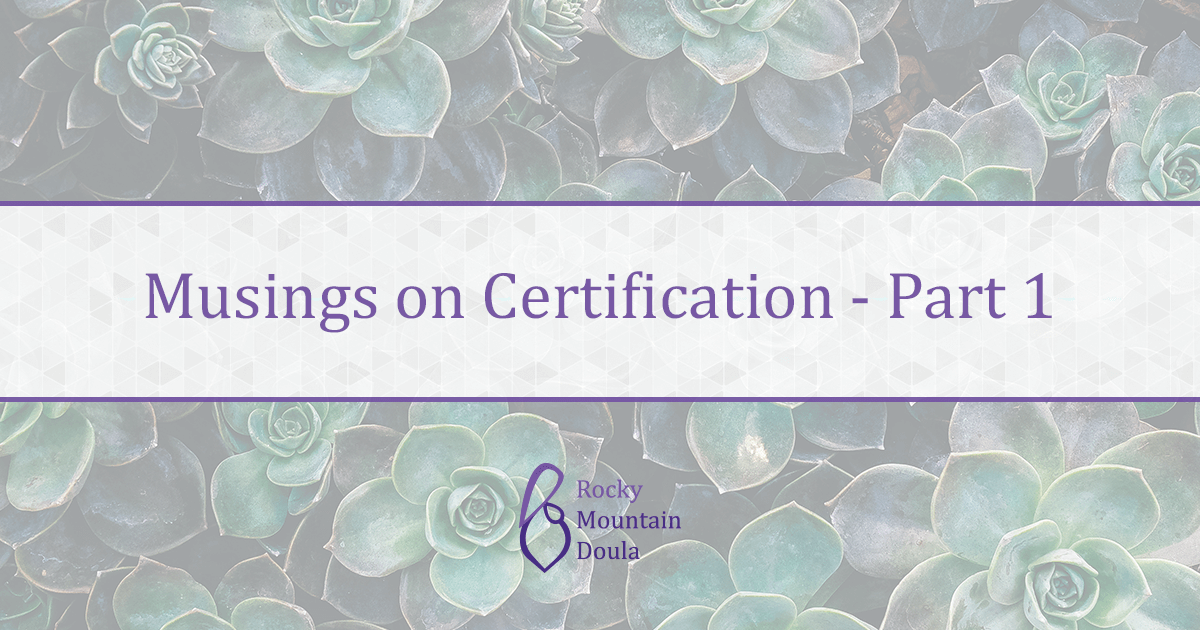 I’ve spent my entire professional life extolling the need for certification for doulas. I believed in the original intent, in the achievement of a measure that shows we have completed a course of study and practical experience, can operate safely within a responsible scope/standard of practice, and are accountable for our actions before our professional peers. I’ve never liked the idea of “make it up as you go along” or “fly by the seat of your pants”, or in the words of our pop culture, “I do what I want!”

So… why am I teaching doula trainings now that are not affiliated with any certifying body?

What is that about? This may take more than one post to explore, but bear with me. I think you’ll find it worthwhile.

Respected DONA doula trainer Amy Gilliland stated in her blog post dated June 13, 2017 that there are now at least 67 organizations claiming to certify doulas in the US. A colleague told me the other day that the count is actually now approaching 80!

The idea of doula certification has been completely watered down by too many organizations/bodies/companies and their wildly varying scopes/standards of practice. (And sometimes, a total lack thereof!)

Each addition to the ranks of these companies/organizations adds to the cacophony of voices, and now the very term “doula” is being watered down, redefined, and stretched out of recognizable shape.

Even the term “certification” doesn’t have the same meaning from one company or organization to the other. Is there value in pursuing certification as doulas under these circumstances?

Let’s start by thinking about how doula certification relates to our work with birthing families.

Do parents in your area value certification? Do they understand the differences between the various companies and organizations that certify doulas? If we’re perfectly honest, the answer to this is generally no.

Most expectant parents could not care less about this, nor do they want to take valuable time away from their birth and parenting preparations to understand the confusing lineup of certifying bodies and their requirements.

With the dizzying array of choices and information expectant parents have to sort through, it’s simply not fair to ask them to spend hours of their time trying to understand the convoluted state of our profession’s attempts at “certification”. They’ve got enough on their plates!

Hospital programs account for a very small proportion of how doulas actually work in the field. But it’s a valid question.

Some hospitals accept X, Y, and Z certifications, while other hospital programs have opted to bypass the mess and simply train their doulas in-house. With an inability to bill insurance or Medicaid (did you know that over 50% of births in the US are covered by Medicaid?), it’s not likely that hospitals will be creating programs in great number unless they plan to ask doulas to work on a volunteer basis. (Which is a pet peeve of mine, and a post for another day…)

Community doula programs, whether they run on grants and pay the doulas or they expect the doulas to volunteer their time and skill, often accept any number of training programs or train in-house, and certification may not be required because it is often a cost unpaid/under-paid doulas cannot bear.

So if the parents don’t care, and the few doula programs are at best inconsistent on the matter, then what about personal reasons for doula certification?

Perhaps like me, you’ve been committed to meeting some rigorous standards for certification, and to maintaining that certification.

Initial certification processes vary quite a bit from one organization/company to another. There is plenty of controversy among doulas about whether it’s a fair measure of a doula’s skill for her to be evaluated by other professionals, whether three or five or however many births (and what kind of births) are sufficient to show the doula is proficient, and whether exams (or lack thereof) are indicative of skill or dedication.

While I think it’s completely fair to ask if a doula is capable of working within a set of parameters appropriate to our profession, the way in which it’s done is all over the map, can come off as arbitrary or subjective, and I venture to say, it’s probably not very effective. The temptation to choose a program that is easier to complete, less expensive, and less rigorous is strong for aspiring doulas.

What about recertification as doulas?

Each org/company has different rules about what is and is not accepted, and some are now only accepting their own pre-approved credits. (Those are educational offerings which have paid the certifying body for “continuing education credit” approval.) This means that instead of learning what you want to learn, or deciding for yourself what is relevant for your practice or area or needs, you are learning only what the org/company wants you to learn unless you pay for that AND for other continuing education which you can’t use to recertify. Most of us don’t have an overabundance of cash flow, and have to carefully budget our continuing education as a cost of doing business. Paying more than necessary is not appealing or even realistic, especially in the early years of your practice.

Accessibility has to be considered as well; community events which are most accessible to you and would additionally provide networking opportunities are often not pre-approved for recertification. (Local event organizers have to choose which organization(s) they will pay for pre-approved continuing education credits, and in a diverse community where a number of organizations are represented, this is a no win situation. Often, the least expensive organization pre-approval is often chosen, or the decision is made not to seek out approval at all.) Again, you as the doula wind up paying twice if you want to take advantage of the local events and also gather credits for your recertification.

Ultimately, you have to ask yourself whether recertification is about staying current and relevant in your field, or about continuing to pay into a company/organization that may or may not benefit you or the profession as a whole.

Obviously, there is more to think about, and more to say. I will pause with this suggestion:

Do your homework carefully.

Research not only what an organization says about itself, but what doulas say.

Look at reviews, how their online groups are run, what people see as their weaknesses.

Talk to people who have recently gone through the process of certifying with them.

Don’t be in a hurry to commit.

And think carefully about WHY you want to certify. That might be the most important question you ask in the entire process. I have been providing doula support & parent education in the Denver metro area since 1998, as well as lactation consultation since 2012.

I have been training doulas since 2005, & I am committed to helping you get a strong start on the most fulfilling career imaginable.